This is a story about change.

As expressed previously, politics was something I was never really into. I had little time for it. I didn’t feel that it had a big impact on my life so I switched off when a political topic came up. It wasn’t until I was on holiday with my brother a number of years ago that, after shrugging in response to a political question, I was told I should take more of an interest in it. So… that’s what I did. I took a political test at around end of 2015. This is where I landed. 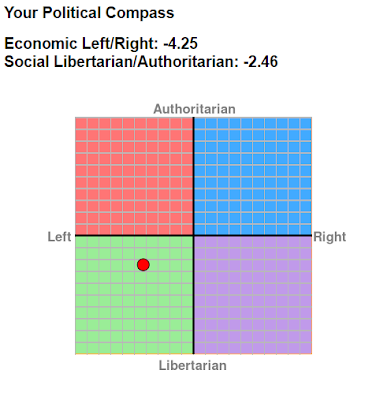 A full on communist, right?

As one can imagine though, once one gets more involved in a topic, their views change. Once I became more informed about the specifics of things, I started to see things differently. Needless to say, I was rather shocked when Donald Trump won in 2016. There was a large group of people that was seeing something that I couldn’t. He had a message that resonated with certain people. What was that message? There are some who are still scratching their heads trying to figure that out. Some like to dismiss all his supporters with a simple: “They’re all just a bunch of racists”. I think this is intellectual laziness. To dismiss your opponents as nothing but stupid, or immoral is an easy way out. When you really look into it, those accusations do not account for his victory. If this is the only reason you can think of, you need to get a bit more creative.

I started watching a bunch of different creators on Youtube and seeing/taking part in discussions online. Some of the podcasts I regularly tuned into (depending on the guest) was Sam Harris' Making Sense podcast, or the JRE. Both were (and still are) very insightful. I watched some of Vox's youtube content. Then I started watching Ben Shapiro’s show frequently along side Steven Crowder’s. They had arguments --convincing ones, that made me change my mind on a lot of issues. I don’t currently agree with everything that I believed back then, but I have gained an understanding of what others believe. I can now view things from the ‘other side’. And I have discovered that there are a lot of points that people think are valid, but aren’t when taking into account what the other side believes. And they never discover this because they don’t bother to properly investigate what the other side believes. Remember, for those that you disagree with, in their mind, their point of view and what they believe is just as coherent as what you believe. Even when you’re at a total disagreement. Your job should be to find out why they feel that way and see what bits it is that you disagree on.

Let’s look at how much I shifted over a couple years. 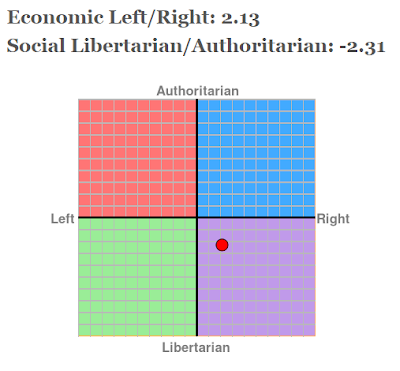 Boom. Shifted over to the right, with a little less on the libertarian side. I spent around a couple years down this road, gathering an understanding of why people would support Trump. It was fascinating how two groups of people would interpret something he said in two completely different ways. It should make you think that some people believe he’s the most racist, anti-semitic person ever, yet he has tremendous support from the black community (more blacks and Hispanics voted for him in 2020 than they did in 2016) and Israel love him so much they name things after him. You’d think Israel would be good at spotting anti-semitism by now, wouldn’t you?

I no longer watch the conservative shows as much as I used to. At the moment I listen to a lot of Scott Adams (creator of Dilbert, self describes his social views as “left of Bernie”, predicted Trump to win back in 2015), Douglas Murray (Neocon from the UK), Bret Weinstein (evolutionary theorist, also quite on the left) and a variety of different people here and there. Let’s see where I currently stand: 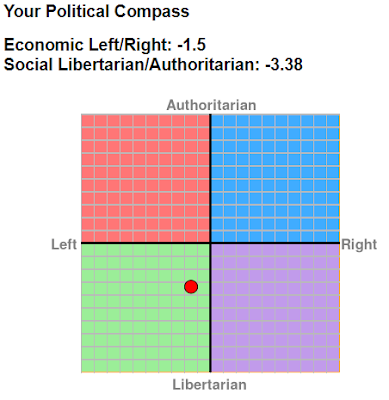 Now I’m somewhere in-between where I once started and where I went to. Am I going to stay in the same spot forever? Highly unlikely. I will continue to keep learning and pursue what I believe to be true.

What can we learn from this?

The most important thing I can recommend is listening to a diversity of opinions. And I don’t mean ‘diversity’ like all the woke intersectionalists would describe it. I mean real diversity, as in, the diversity of the information you receive. I don’t care about the superficial diversity of the person who is delivering the message, as long as the message is an honest representation of someone’s views. THIS is diversity of opinion. It is critical to understand where the ‘other side’ is coming from. By doing this, it will ensure that you grow, learn, and find out that you are wrong. Finding out that you’re wrong is a good thing, because once you discover that you’re wrong, you no longer have to stay that way.

Friendly remind that this does not sway anyone. Stop being ridiculous.

Anyone you know can change their mind.

October 07, 2020
With New Zealand elections right around the corner, I see a big push from our government to get as many people voting as possible. The political parties are looking to grab as many votes as they can to attain more power and influence. But in terms of our democracy, should we be encouraging everyone to vote? Can you think of a group of people who you wouldn’t want to vote and who should be discouraged from voting? I know I can. I know this because I was one of those people who should have been discouraged from voting. For the last two elections I can admit that when I voted, I effectively threw away my vote. I didn’t properly look into it all. I didn’t care. I didn’t feel like it affected me in any meaningful way. I just voted because “that’s the thing to do” and the political party that I voted for was that which my family and those around me had always voted for. There was no original input to which way I voted. Fortunately, since then I have started taking an interest in politics, c
Post a comment
Read more